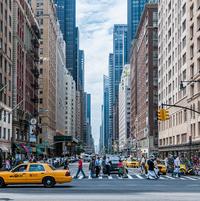 Ageing in America 40 years on

Forty years ago, the industrial designer Pattie Moore conducted a daring piece of social research. Aged 26 and working in New York at the famous Raymond Loewy design studio, she decided to find out what life was really like for older people living in the USA. Aged to look like an 85-year-old by Dustin Hoffman’s make-up artist for the hit film Tootsie, she took to the streets of America to discover for herself the realities of growing old.

Over a three-year period, she visited scores of US cities, creating several different characters of older women and carrying out daily tasks such as shopping or catching a bus in a unique empathy experiment. Moore didn’t just look the part in her disguise – she simulated the infirmities of older age with prosthetics to reduce her hearing, vision and mobility. She wore gloves to simulate arthritis and put on awkward, uneven shoes so she was forced to walk with a stick.

What she encountered was mainly shocking. Her experiences as an old woman ranged from casual ageism, such as being deliberately short-changed in a store or having coffee poured over her without apology by an air hostess on a flight, to a savage beating in a no-go neighbourhood. She even attended a professional design meeting with her own peers, only to be unrecognised and cold-shouldered. She also made friends and received small kindnesses. She recorded her impressions in a best-selling book, Disguised: A True Story, which concluded that American cities were far from age-friendly and asked important questions about identity in later life.

Pattie Moore’s research had a lasting impact. It helped to shape the direction of inclusive design and heralded the introduction of age suits and other ‘empathy tools’ in designing everyday products and services. To mark the 40th anniversary of her study, I narrated a BBC Radio 4 programme, Designing a World for Everyone, in which Moore returned to New York to retrace her steps – this time as an older woman without a disguise. The big unanswered question, however, is whether the experience for older people in US cities has improved four decades on.

Today, there is certainly much better age and disability-related legislation in place to remove some of the physical barriers in the built environment that Pattie Moore encountered. There are many more older people around with a louder voice and more political clout: the number of Americans aged 65 and over is projected to nearly double from around 52 million today to 95 million in 2060. But stigma still persists around ageing and dependency, a side-effect perhaps of America’s rugged culture of individualism and self-reliance.

Other shadows darken the horizon. Americans today live longer than they did in the past – average life expectancy in 1950 was 68 years and by 2016, this had risen to 78.6 years. However, life expectancy in the US is still lower than in other large and wealthy countries, which score an average of 82.2 years, and it has been in decline in recent years due to a range of factors such as access to health services and rates of obesity, suicide, violence, road accidents, tobacco and drug use.  A study by the AARP Foundation found that around one-third of US adults aged 45 and older report feeling lonely, and those on low incomes are especially vulnerable.

Which brings us to the biggest difference between 40 years ago and today. Economic, social and health inequalities have widened dramatically since the late 1970s. Different people today have entirely different experiences of growing old in American depending on their income, where they live and their ethnic and cultural background. Basic health insurance is still denied to millions.

As the world watches the unedifying spectacle of Donald Trump (aged 74) squaring up to Joe Biden (aged 77) in a presidential election conducted against the background of an ugly and divisive culture war, there is little to suggest that things will improve for millions of older Americans any time soon. After Pattie Moore’s solution-seeking crusade walking a mile in the shoes of her seniors, that should be considered beyond a shame.

Jeremy Myerson is Helen Hamlyn Professor of Design at the Royal College of Art and a Visiting Professorial Fellow at the Oxford Institute of Population Ageing. His Design Museum touring exhibition, New Old, has been on show at the Pratt Institute Gallery in New York.

Professor Jeremy Myerson is an Honorary Fellow at the Oxford Institute of Population Ageing, and the Helen Hamlyn Chair of Design at the Royal College of Art.