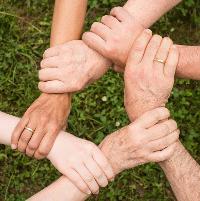 Hand in hand: an argument for an analytical alliance on young and older people

Would an alliance between academics researching young people and those researching older people be a good thing?  I think it would. Gerontology and Youth Studies tend to define their subject matter by an age range. My proposal is that both disciplines should take account of how the other discipline approaches the age group of interest to it. As well as helping them to avoid replicating stereotypes, prejudices, et cetera, this would open up the possibility of making use of analytical frameworks – research methods and strategies – that have been found to be fruitful in the case of the other age group.

What makes someone an ‘older person’, or indeed a young person? Where older people are typically defined as persons aged 60 or above (with 65 also often used as an alternative threshold),  youth researchers Pam Nilan and Carles Feixa use ten and 35 years as their preferred age boundaries. Such clear-cut divisions are obviously suspect. As developmental psychologist Ian Stuart-Hamilton says with respect to an age threshold for ‘old age’: it is ‘essentially arbitrary’. This is why many gerontologists and youth researchers advocate continual reflection on the basic age categories and encourage critical thinking on whether and how research on older and young people produces understandings of older and young people.

The term ‘ageism’, first coined by gerontologist Robert N. Butler in 1969, has been defined ‘as a process of systematic stereotyping and discrimination against people because they are old’. Although Butler acknowledges that young people too are faced with prejudices, he held to the view that ‘ageism was most prevalent against older people’. With such a definition as a foundational principle, age-based prejudice, as a problem for young people, seems to have been neglected by researchers. The WHO’s first ‘Global Report on Ageism‘ conceded that ‘too little is known about the scale, impact and determinants of ageism against younger people.’ This view is shared by psychologists Michael S. North and Susan T. Fiske: ‘As under-researched as ageism generally is, even more scant is the subfield of ageism against the young’.

Some researchers are explicit about excluding young people from research on ageism. Toni Calasanti, for example, argues that young people cannot be subject to ageism properly understood.

‘People regard youth as a temporary status – a transition period and a training ground on the way to the authority of adulthood. We accord esteem to youthfulness as our “hope” or “future.” By contrast, nothing ultimately halts or tempers the exclusion of the old, who never transcend that status and remain marginalized as “forever other”.’

The suggestion that the age-based marginalisation of young people is fundamentally different because the experience is temporary – it passes with age – fails to recognise the significance of the fact that that young people are already affected now (i.e. in their present).".

Calasanti even makes the point that: ‘In the long run, ageism encourages young people to see the old as “other” and not fully deserving of citizenship rights.’

In other words, young people are portrayed as perpetrators, who are constructing the ‘other’. Support for the view that young people do indeed behave in this way is not hard to find. The authors of a blogpost on a recent submission to the European Court of Human Rights as part of an action on the climate crisis is peppered with ageist language, including quotations from ‘Crabbed Age and Youth’ (‘youth is full of sport; age’s breath is short’, ‘youth is nimble, age is lame’, ‘youth is hot and bold, age is weak and cold’…etc). In the same vein, I once depicted international law as having an ‘old, wrinkly face’. Although the intention was to illustrate in a subversive manner the exclusion of young people in international law, it reinforces stereotypical images of older people.

I would suggest that it’s easy for academic authors to lend encouragement to the construction of young people as the ‘others’ of older people and vice versa, even when this is far from their intention.

Focusing on a common aim

Is there a way to forward? My contention is that both Gerontology and Youth Studies, young researchers and older researchers, should try to focus on their commonalities. Identifying and challenging age-based discrimination should be regarded as an aim of everyone doing research on age-based groups. It should not matter whether a person is discriminated against because they are young or because they are old. Either scenario is unfavourable.

It’s surely a mistake to try and argue that either young people or older people are unaffected by forms of age-based marginalisation. We need a nuanced understanding of the issue. While both young people and older people suffer from exclusion, the way they are affected differs. Already in 1982, the youth delegate of the Netherlands to the UN, took up this idea. She delivered a speech which drew attention to the distinct experiences of young and older people (which is reproduced in a summary record of UN proceedings):

‘A recent conference organized in Europe was entitled "Preparation for life". The title gave the impression that young people did not yet live but had to be taught to live before they could join society. Similarly, the aged, who had most of life behind them, were no longer allowed to remain in society's activities. She wondered what gave the middle generation the right to behave as if it were the sole possessor of the present.’

Even though young people and older people both have grounds for regarding themselves as victims of age-based stereotyping and discrimination, this should not undermine our sense of what is distinctive about the problems they faced in this regard. As age groups, they are distinct, with different abilities, hopes, and challenges.

This proposal should not be immune from critical reflection. The quotation from the youth delegate to the UN portrays ‘the middle generation’ as solely responsible for marginalising young and older people. This should lead us to ask whether an alliance of young and older people itself builds on the ‘marginalisation’ of people who are caught in between the two groups. Can members of ‘the middle generation’ experience ageism as conceived by Butler? I cannot answer this question here, but I recognise it as a valid and important question.

The categories of young people and older people, youth and old age, have proved to be invaluable for research and policy. I am not suggesting that we lose the distinctiveness of these categories by merging two distinct bodies of research. The aim rather is to raise awareness of possible avenues of cooperation so as build on existing research on young people and older people. The obvious starting point is to see how the concept of ageism could be opened up and elaborated for young people. This was already demanded by the authors of the ‘World Report on Ageism’:

This would not only help to identify patterns of marginalisation against young people as a group. I have argued that the proposed alliance could serve older people as well. Age-based stereotypes, prejudices, and discrimination can thus be further challenged – this time hand in hand.

Julian A. Hettihewa is Visiting Student at the Oxford Institute of Population Ageing. He is Research Assistant and Doctoral Candidate at the Institute for Public International Law, University of Bonn. He is also lecturer at Humboldt-Universität zu Berlin as well as Co-Chair of a research group at the Law Department of Freie Universität Berlin.