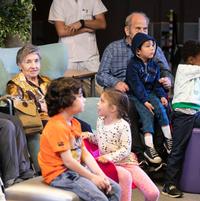 Inspired by a TV show broadcast in the UK - “Old People’s Home for 4 Year Olds” - Spain broadcasters have followed suit in making use of TV to disseminate good practices for intergenerational projects. “Cosas de la Edad” [Things about Age] is the name of a project in South Madrid which brings together four-year-old pre-school toddlers and older people from a local nursing home. It’s also the name of the TV programme which shows us the project at work. The basic aim of course is to foster positive relationships between the very young and the very old, relationships which would otherwise remain the preserve of the family. But there is also a research angle. The project is being evaluated by a research team who will assess the impact of sustained - daily in fact - intergenerational contact on the well-being of the ten older people who participated, and will try and get a grip on what the experience meant for the ten children who visited them.

The project ran for six consecutive weeks, two hours a day and five days a week. After watching the first episode of Cosas de la Edad, I feel confident that no one could be untouched by what the programme was showing.  Live reality TV, used in this way, engages our sympathies and imagination. It is a very effective means for prompting - and informing - careful reflection on how we want to live in a society with an increasingly ageing population.

TV is an excellent vehicle for promoting interest in such research endeavours in the wider community. Programmes like Old Peoples Home for 4 Year olds and Cosas de la Edad have the potential to provoke controversy; they can arouse conflicted emotions as well as positive and negative judgements.  They can act as prompts for conversations, debates, news and social media posts, and these could help increase the interest in intergenerational programming work. They could even lead to innovative developments in residential care homes and schools. Community settings might re-think their services in a more shared-site intergenerational way.

That there are benefits to be had from young children and older people sharing daytime care facilities has been shown by many research studies around the world. The real interest of these two TV programmes, however, is that they enable us to watch live experiments in intergenerational programming. We become observers.

From the first episode of Cosas de la Edad we could understand that the IP experience was carefully planned and structured in a timetable of activities where both generations had the opportunity to interact and engage mutually. It included different games, listening to stories, drama and singing, outdoor and physical activities. The video clip provided by Moviestar+ is heart-breaking and uplifting at same time. It’s full of gentle physical interactions: holding hands, cuddling, help and support for walking or other physical activities. Old and young give each other mutual encouragement. Perhaps all of this can be considered as natural human interaction, though we have to bear in mind that the members of the two age cohorts were strangers to each other before the programme started.

We could see this at the beginning of the very first meeting between the two groups. There was clearly a bit of tension in the air. No one knew what to expect or how to make the first contact. After several hellos, and quite out of the blue, a little boy named Diego started to shake the residents’ hands and introduce himself. As soon as the other toddlers saw what he was doing, they joined in and the spontaneous interactions really started to flow! Even the most sceptical of the residents were calling to the children to ask their names so as to get to know them better. All the elements were in place to start the IP in a positive and meaningful way. Above all, the willingness to establish a personal relationship was evident.

Although the Spanish IP was inspired by the UK TV programme and shared common aims, there were some differences. For instance, the UK research team included gerontological specialists who were consulted about the measurements and assessments that should be built into the research and used to evaluate the impact of the programme. What they didn’t have was any kind of pedagogic/educational psychology expertise. The Cosas de la Edad research team was more multidisciplinary. It included a geriatrician, a psychologist and a sociologist with a background in intergenerational programming. It was a well-informed team designed to tackle the research challenges posed by the interactions in both age groups.

Old People Home for 4 Year Olds team reported that at the beginning of the intergenerational experience most of the older participants were identified as depressed. After the six weeks trial the eleven old participants had become more optimistic. So far the Cosas de la Edad team have only reflected on the impact of the first week of the trial, and the results are generally positive for both groups of participants. The hope is that the opportunity of interacting with these young children will foster in the older generation a sense of the value of such relationships and a possibility of a more meaningful future.

Programmes like Cosas de la Edad or Old Peoples Home for 4 Year Olds are pioneering initiatives, certainly in Europe. When the production teams decided to broadcast an intergenerational social experiment on live TV, they were acting like the Spanish boy Diego, who had the courage to make the first move. And this kind of courage can be tremendously useful in paving the way for other intergenerational projects.

Cláudia Azevedo is Research Fellow for LARNA (Latin American Research Network on Ageing) at the Oxford Institute of Population Ageing.