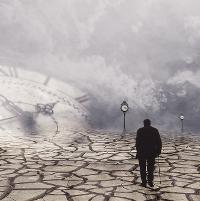 I recently attended a lecture by Professor Ruth DeFries, who is professor of ecology and sustainable development at Columbia University. The lecture has been recorded by the Oxford organisers, and it is available at this link.  Professor DeFries is interested in the way that demand for food and other goods is changing land use, with a special focus on tropical areas.

The lecture explored some of the concepts illustrated in her forthcoming book “What would Nature do? – A guide for our uncertain times”. Her ideas made me think that this would be a very good topic for a blog post for the Institute of Population Ageing, as they position themselves at the junction between ecologic and social disciplines, highlighting the urgency and the importance for interdisciplinary approaches to this topic. She uses some brilliant and ingenious examples to link processes and adaptive strategies found in the natural world to current social challenges arising out of human population growth, continuous urban development and the increasing interconnectedness of people and goods. The idea that we might be able to learn from Nature and apply its principles to prevent or mitigate the consequences of the uncertainty that characterise our changing human world is a fascinating one.

Human know-how and technology have become so impactful on the planet that we think of ourselves as entering a new geological epoch, the Anthropocene. Although this thought may seem exciting, it comes with new responsibilities and uncertainties. First, we have a responsibility as the species whose activities have triggered the events that are leading the planet into a new epoch: its future (not just ours) depends heavily on our decisions. Second, this epochal change is fraught with uncertainties, and there is no roadmap - no historical experience - to guide our most consequential decisions.

One of the most salient characteristics of the Anthropocene is its interconnectedness. We live in an extremely connected world, where people, goods, ideas and information can travel almost freely to every area on the planet. Connectivity, however, is not an unmixed good.  The current pandemic has brought home to us some of the risks associated with interconnectedness through travel. Zoonotic diseases, such as COVID-19, are not new in human history, but outbreaks were geographically confined. An analogous point applies to the way that information - and misinformation - travels around the world.  There has been an epochal change in the scale of human interconnectedness, and it brings new uncertainties and risks in its wake.

The step into a new epoch may be new for humankind, but Nature has already experienced many such critical changes, and it has developed mechanisms to enhance its resilience. Professor DeFries explores four strategies applied in different natural systems to respond to stresses and limit stochastic effects, with a particular focus on connectedness. In each case, she provides examples of where they have already been applied by our society, and where they could be applied to face current challenges.

The first strategy analyses the architecture of networks. In many natural systems, networks are essential, for example, leaves’ veins are interconnected systems of vessels allowing nutrients to be transported throughout the plant. Although the most primitive plants had parallel and disconnected veins, evolution favoured interconnected systems. Developing interconnected veins was a big investment for plants, as they have to produce more and longer veins. What made these structures evolutionarily favoured was their redundancy. If a part of the network is damaged or destroyed, as with plants’ leaves by parasites, the redundancy of connections allows the leaves to maintain their functions.

In human society, this lesson was notably learnt and applied in the structure of the internet, which makes use of ideas developed by Paul Baran, a US engineer working in the cold war period. He realised that centralised military communications - i.e. a central hub and many branches - were highly vulnerable to external attack. Contrarily, decentralised and distributed structures might appear to be less efficient, but they have clear advantages in an uncertain environment, in which it is unknown when and where an attack might happen.

The global food supply system provides a striking example of failure to embrace the idea of a distributed network. Currently, a very limited number of countries with favourable environmental and climatic conditions and a cheap workforce, such as Unites States and Brazil, supply most of the foods consumed globally, which means that the vast majority of countries depend on them. In the short term, this is an efficient system; food production is cheap. As a one-way system, however, it is extremely fragile.  The supply chain is vulnerable to local stochastic events, such as droughts or nationalist policies; prices spike, which lead to crises. Hence, more redundancy in the food supply chain, which implies more self-sufficiency, would guarantee more stability in the network.

The second strategy advocates more diversity to keep a wide range of options alive. In nature, if one species goes extinct, another species is ready to take over the niche left empty. Similarly, if environmental conditions change, making the environment unsuitable for a species, another species will take advantage of the new conditions.

Financial services have taken this diversification strategy fully on board. Harry Markowitz gained his Nobel Prize in Economics for showing how diversifying investments in the stock market is an excellent way to cope with uncertainty. Investing in just one field may provide better returns in the short term, but it does not protect the investor against unpredictable events. Whereas investing in multiple fields reduces the risks associated with stochasticity, and the strategy will pay off in the long term.

Once again we can see that human societies have failed to learn apply lesson to their food supply. Our diets are becoming more and more homogeneous. Currently, 50% of our energy intake comes from only three types of crop: wheat, rice and maize. As well as being a loss for traditional foods and crops, loss of food diversity will also impair our capacity to adapt to climate change, as there will be fewer genes and traits that we might want to breed into current crops to make them more heat- and drought-resistant etc.

The third strategy builds on the way that natural processes can self-correct through negative feedback. A brilliant example is provided by the carbon cycle, which has allowed the Earth’s temperature to be relative stable over geologic times. The process starts with CO2 being released in the atmosphere through volcanos, and ends with CO2 being taken out of the atmosphere through the process of rock weathering. There are, however, several other beautiful examples of negative feedback processes in Nature, such as predator-prey interactions and insulin regulation.

Once again, it was the financial world that learnt the lesson from Nature. When stock market values go down too much and too quickly, circuit breaker systems are put in place, giving the market time to stabilise and avoid unaffordable losses.

An important example of a case in which negative feedback systems have not been applied – or have been applied when it was too late – is wildfire management. The idea that fires are bad for forests and have to be extinguished in order to limit damages to timber is still widely held. The approach has contributed to many of the disastrous wildfires that we are still witnessing. Preventing fires from occurring increases the amount of fuel load within forests. Hence, when a fire occurs, it is more likely to be extremely powerful and destructive. Contrarily, if small fires are allowed in forests – which was the pre-modern way of managing forests in North America for example – these would act as circuit breakers, reducing the fuel load of the forests and preventing bigger wildfires from occurring.

The fourth and final strategy relies on bottom-up decision-making processes, and the ability of natural systems to self-organise. The idea of the tragedy of the commons has made us prone to think that, without some sort of force from the top, human activities must eventually be detrimental for the environment and society. However, in Nature, we often see that bottom-up approaches can lead to emergent properties and, in turn, to the self-organisation of complex systems. Two of the clearest examples are the behaviours of ants and bees. Despite the idea of queen bees and queen ants as the leader of ant nests and beehives, respectively, there is nothing such one single individual governing and managing these complex systems. What coordinates the behaviours and the decision-making processes of hundreds of ants simultaneously, are chemical signals produced by each single individual, which affects the behaviours of those nearby. Chemical signals may seem irrelevant to human decision making, but the idea that the behaviour of a signal can positively affect behaviour and decision making is a strategy that we can learn from Nature.

The Paris Agreement, taken by 196 countries within the 2015 United Nations Framework Convention on Climate Change (UNFCCC), although being far away from being sufficient, is a successful example of how countries have collectively agreed to commit to reduction and mitigation strategies. This happened without any top-down imposition, but just by bringing to the table what each country believed they could have achieved in terms of emission reductions.

In summary, the four strategies that we can learn from Nature in order to deal with the uncertainties that we are facing at the dawn of Anthropocene are: 1) interconnected architecture of networks, 2) diversifying options, 3) self-regulating negative feedbacks and 4) bottom-up approaches. These principles can provide a roadmap to navigate the Anthropocene, helping us dealing with the uncertainties of a new epoch and, potentially, building up more resilient and equal societies.

I recognise that I have presented the strategies in a very abstract way - without connecting them to population ageing as such. But I feel confident that researchers with a social science background will be able to make these connections for themselves and find ways of applying these strategies in their own field.

Luca Chiaverini is a DPhil candidate at the Wildlife Conservation Research Unit, Department of Zoology. His research examines scenarios of biodiversity conservation in Southeast Asia under future land-use and socio-economic changes