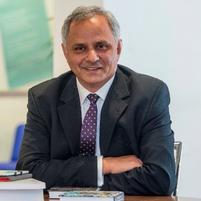 Asghar Zaidi is an Associate Professorial Fellow  at the Oxford Institute of Population Ageing.

Asghar Zaidi is Vice Chancellor at Government College University Lahore (Pakistan) and Visiting Professor at London School of Economics and Political Science, London. Until recently, he was Professor of Social Gerontology at Seoul National University, South Korea. Previously, he was Professor in International Social Policy at University of Southampton (UK); Director Research at European Centre Vienna (Austria); Senior Economist at OECD Paris (France); Civil Servant at UK’s Department for Work and Pensions in London; and Researcher at London School of Economics, University of Oxford, Erasmus University and Tilburg University.

His research spans measurement of active and healthy ageing, the wellbeing of older persons and those with disabilities and data on ageing and older persons. Since 2012, he has led the research work of the Active Ageing Index (AAI) Project for the European Commission and UNECE and the Global AgeWatch Index project for HelpAge International. He has also developed the Wellbeing in Later Life Index for the UK, working alongside the research team at Age UK London.

He has recently completed projects on human rights of older persons (for British Council Islamabad) and on dementia in Pakistan (for Age International UK). He is a Steering Committee member of the ASEM Global Ageing Centre and a member of the Steering Group of the Titchfield City Group on Ageing.