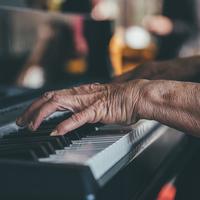 Longevity and music as meaning

“He who has a why to live for can bear almost any how.” -- Nietzsche

To celebrate his 75th birthday, Maurizio Pollini is playing two concerts at London’s Royal Festival Hall. Though he is somewhat stooped as he walks to the Steinway, in the first of these concerts last week, Pollini’s performance of Debussy’s Preludes Book 2 was mesmerizing. Indeed, by the end of the two-hour performance (including three encores), Pollini was playing “like a god” one reviewer wrote.

At 75 years young, Pollini is among a long list of long-lived classical music performers. Indeed, magazine articles about the unusual life span of classical musicians are as numerous as those suggesting to 50 year old women what they “should not wear”.  Pianist Arthur Rubenstein played in public for 85 of his 95 glorious years continuing to perform until he was nearly 90. Pablo Casals played one of Bach’s Cello Suites every day from the time he found that marvelous volume in the Barcelona bookstore until his death at aged 96. Vladimir Horowitz produced masterly performances even at the age of 83 when he played a program in Vienna of Mozart, Schubert, Schuman, Lizst and Chopin and completed his last recording just 4 days before his death at age 85. The dominant figure of conductor, composer, musicologist Pierre Boulez influenced all aspects of 20th century classical music for many of his 90 years. In his late 80s, Arturo Toscanini conducted the complete cycle of Beethoven Symphonies at Carnegie Hall.

Speculation about the seemingly magical connection between longevity and classical music abounds.  Is it the intelligence associated with this level of creativity? In a study of over 49,000 creative types, Anisimov and Zharinov (2013), write that “persons who listen to classic music have more chance to live longer”.  They attribute this to the intriguing and persistent findings surrounding the cognitive capabilities of classic musicians.

Or is it that music is the “something” that these musicians live for? That gives their life purpose? In a recent article in New Scientist magazine, Teal Burrell discusses a growing body of research that shows the health benefits of purpose are remarkably consistent. Significantly lower risks of death, heart disease, stroke and Alzheimer’s have all been found among people with a higher sense of purpose in life.

Of course, teasing out the effects of life purpose from other factors can be difficult. Do people with more life purpose also eat better or exercise more? This would be consistent with the Aristotelian idea of eudaemonia where leading a purposeful life also includes an active body, an active brain, as well as service to greater things. Yet, we learn from public health researcher Victor Strecher, author of Life on Purpose, the findings persist after controlling for age, race, gender, education, income, health status, and health behaviours. If it wasn’t for the fact that life purpose “feels too vague or ephemeral….not scientific enough,” Stretcher suggests it would be a major public health priority.

An alternative theory comes from the correlation found between a higher sense of purpose and an increased presence of the protein telomerase.  Telomerase preserves telomeres which are the caps at the ends of chromosomes that protect DNA from damage. These telomeres shorten with age and stress but this can be mediated with a change in the individual’s sense of purpose.

Returning to Pollini and his musical peers. The highest aim one can have is eudaemonia and central to this is the active pursuit of making things “better” in the broadest sense. Knowing what our greatest strengths are and employing them in the service of something you believe is larger than yourself. Part of this, Aristotle said, is that a person should be serious (“spoudaios”).  But this is serious in the way that someone is a serious pianist.  Sitting in the Royal Concert Hall last week, one couldn’t help believe that Pollini was employing his greatest strengths in the service of something larger than himself.

Strecher, V (2016) Life on Purpose: How living for what matters most changes everything, HarperCollins

Dr Laurel Hixon brings over two decades of health policy and applied health care research experience to OIPA. She has had academic research appointments in both the U.S. and Australia. She has written extensively about health and long-term care financing and reform

Dr Laurel Hixon was a Research Fellow at the Oxford Institute of Population Ageing with research interests in Health and Long-term Care Policy and Reform.