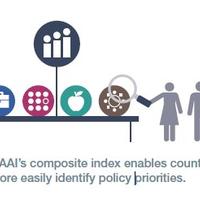 The Asian Active Ageing Index: Findings for Indonesia and Thailand

The speed of population ageing is among the fastest in the member countries of the ASEAN[1], which is a matter of high significance for the social and health care services for older persons. Other public policy implications include reforms in the labour market and pensions. ASEAN governments must therefore be looking into investing additional resources towards forming evidence-informed policies, and this ambition requires a high-quality and independent comparative evidence base for mutual learning.

In addressing these challenges, the active ageing strategies emphasize the scope for social investment, taking the view that the cost of managing ageing actively is cheaper than a passive portrayal of older people as dependent on the state or family. They tap into the potential of the older populations with the aim of promoting good policies and practices to influence a change in the lives of the older population.

Specific goals of active ageing strategies in the ASEAN member countries will include: enhancing the social participation of older persons, promoting their physical and mental health status and removing barriers arising from the age-based discrimination in their communities.

The Active Ageing Index “AAI”, arose from our work with the UN Economic Commission for Europe (UNECE), the European Commission and an expert group (cf. Zaidi et al. 2013), generated this evidence with the same impact objectives in mind for the European countries, by quantifying the extent to which older people have and can realize their potential. A new forthcoming report by the UN Economic and Social Commission of Asia-Pacific (ESCAP) reports on constructing the new Asian AAI using the context of two of the most populous member States of ASEAN: Indonesia and Thailand.

The Asian AAI is more relevant for the purpose of building public policy capacities to measure and promote experiences of active ageing in the older population of the Asia-Pacific region. It can be used in the monitoring of implementation of the Madrid International Plan of Action on Ageing “MIPAA”. It can be aligned to the 2030 Agenda for Sustainable Development, especially in assessing how countries are able to fulfil the pledge ‘leaving no one behind’.

What is the Asian Active Ageing Index?

The new Asian AAI is sensitized to the Asia-Pacific cultural norms, such as the role of older persons in the society, the changing norms of filial piety and the informal nature of contributions of older persons to their families and communities. The Asian AAI also draws learnings from other indices of a similar sort, especially from the Global AgeWatch Index and the Age UK’s Wellbeing in Later Life Index but also from the Hartford Aging Index of Columbia Aging Centre.

The Asian AAI also revisits the choice of indicators (e.g. to include activities of daily living as direct indicators of independent living; use home ownership as an indicator of material deprivation, etc.) and revising the aggregation methods (e.g. by normalising the indicators before their aggregation into the domain-specific and the overall AAI).

Key findings for Indonesia and Thailand

The Asian AAI quantifies for Indonesia and Thailand the extent to which older people can realize their potential in three distinct domains that determine their experiences of active ageing: Employment; Social Participation; and Independent Living. An additional fourth domain, Enabling Environment and Capacity for Active Ageing, goes beyond capturing how societies differ with respect to the active ageing capacity of their older populations and in providing the enabling age-friendly environments for active ageing.

On the basis of the overall AAI for men and women together, Thailand (with the Asian AAI equal to 59.7) does better than Indonesia (50.6). In both countries, the first domain ‘Employment’ contributes the largest. The overall Asian AAI value for males and females in Indonesia are 58.8 and 43.5, respectively. This large gender difference occurs largely due to the fact that Indonesian males have a considerably higher score in the employment domain (96.6) than females (46.9). Similarly, there is also a large gender difference in Thailand with the overall index as 66.9 for male and 53.9 for female. Such gender differentials were also present in Europe, especially in the Southern European countries, with a traditionally more patriarchal societal setting. Similar situations were also observed in China and South Korea.

Older people in both countries tend to continue working beyond the pensionable age, often in informal employment. This is due partly for the fact that pension systems are inadequate. Pensioners with low incomes are more likely to continue working, indicating that older people in both countries tend to work more out of economic incentives or necessity than by choice. Nonetheless, access to employment enhances opportunities of self-fulfilment and the income generated supplements low pension income.

Both countries, particularly Thailand also show high rates of providing care to grandchildren which is related to the tradition of grandparental care, but also due to the lack of public childcare infrastructure in both countries. The financial well-being of older persons in Indonesia is observed to be worse than that in Thailand.

Older persons in both countries are physically and mentally capable which explains their high employment rates and the level of support they offer to their family members. The focus of active ageing strategies should therefore be towards supporting older workers continuing to stay actively involved with the help of flexible retirement plans and age-friendly work environment. Such a policy response to incentivise longer working careers will become increasingly important as pension systems will start maturing and pension incomes will rise.

Older persons in these countries, especially older women, have had little or no formal education. It is therefore hard for them to find a job opportunity or a training. It is important to ensure that they are provided with opportunities to participate in other non-market activities, such as voluntary activities, care at home and in the communities, and other similar ways to strengthen their independent living. All relevant information to facilitate such activities should be understandable by older people and, where necessary, trainings and education should be provided to older people’s association to play a role.

Our analysis also highlights that not all older people can actively engage within their society, families, and communities due to poor health, insufficient financial resources, and education. In both countries, older women are more likely to fall behind in this respect than men. As the incidence of disability increases with age, interventions in improving health outcomes need to be prioritised for older women particularly those who live alone in rural areas. This shows that gender differences in active ageing are fundamental in these countries which are linked with ageing experiences in earlier stages of life. Therefore, policies on active ageing will benefit from a life course approach that addresses these inequalities in the earlier phases of life.

Finally, as the proportion of older population with difficulties in instrumental daily activities increase in old age, it is important to improve key aspects of the age-friendly infrastructure, such as transportation and access to public buildings.

[1] The Association of Southeast Asian Nations (ASEAN) was formed in 1967 by Indonesia, Malaysia, the Philippines, Singapore, and Thailand. Brunei joined in 1984 and Vietnam joined as its seventh member in 1995. Laos and Burma became full members in 1997 and Cambodia became its tenth member in 1999.