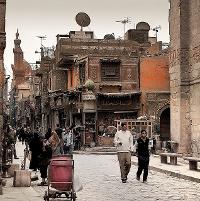 The ageing transition is happening in the Middle East and North Africa (MENA) region. It is happening fast that the governments, policies, and individuals don't fully realise it. Even though life expectancy is rising, ageing in the region is accompanied by ill health with a high prevalence of non-communicable diseases, including dementia and cognitive impairment. Many ill-health conditions are related to the perception of how people are expected to live their lives and misinformation about ageing and health habits. The current MIPPA review could be an opportunity for the governments in the region to evaluate and re-orient their preparation. MIPPA, short for the Madrid International Plan of Action on Ageing, was signed in April 2002 by over 150 countries in a political declaration at the Second World Assembly on Ageing. The first global agreement of its kind on ageing. It was meant to address the critical challenges to ageing and have governments agree to link ageing to social and economic developments and human rights frameworks. It provided a plan of action that focused on:

The review of MIPPA takes place every five years, and this year marks the fourth review, 20 years since its inception.

The agreement, at the time, raised the issue of how ageing is likely to be more challenging to developing countries. Because developed countries aged gradually, they had time to adapt to ageing and to think of suitable policies, such as developing sustainable pension systems. On the other hand, developing countries face a fast transition into ageing with associated demands alongside other developmental challenges. Furthermore, the speed of evolution of the ageing process, with limited time to re-evaluate the meaning and expectations of ageing, is likely to confuse both governments and individuals.

On the individual level

Current cohorts of older people grew up as young adults with an understanding that at age 60, one would be expected to live for only a few years more. However, as they grew into old age, life expectancy has dramatically improved, and many lived longer than they had thought. However, they entered old age without planning or changes in attitudes or perceptions with adverse implications on the quality of their ageing experience. For example, in Algeria, in 1960, those who were 20 years old knew that life expectancy at age 60 to be 14 years. Yet, in 2020 when that cohort reached the age of 60, life expectancy at age 60 had risen to 22 years. This meant that this cohort had had eight more years, unexpected, to live on average; see Figure 1.

These rapid increases in life expectancies, both at birth and age 60, are not limited to Algeria. Similar increasing trends could be observed in Tunisia, Iran, Lebanon, Bahrain and the United Arab Emirates. Other countries such as Egypt, Kuwait, and Saudi Arabia have gained minor life expectancy increases at age 60. The lack of advocacy groups for ageing in the region implies that everyone builds their views of how much is left to live and what ageing should look like, based on their limited social network. Such perception of ageing is also confounded with various socio-economic inequalities. Most of the care for older people in the MENA region is informal, provided by close family, especially younger women. Hence, these unplanned years of later life, accompanied by ill health, have a considerable impact on all age groups, especially women, who are more likely to provide informal care.

Caregiving in the region, which is usually informal, is provided by the close family. In addition to the care burden, there is a risk related to the lack of appropriate knowledge among informal caregivers to deliver adequate care for an older person. While informal caregivers do their best to meet older people's emotional and social needs, they do this without support, updated information, or formal/government guidelines. This lack of guidelines has an immediate risk of providing the wrong kind of help to their loved ones. For example, caregivers may help with day-to-day life demands by relieving the older person from simple activities like cooking and shopping. By doing this, they effectively gradually encourage their parents/grandparents to reduce their movements and overall involvement in day-to-day living. That sort of help is likely to lead to a cycle of reduced mobility, weaker muscles, increasing joint pain, and speeding up ageing, impacting the overall quality of life of the older person and growing, rather than reducing, their care needs.

On the institutional level

With the sudden and fast transformation into aged populations, responding adequately to the growing needs of large cohorts of older people is highly challenging for many, including healthcare professionals. This affects diagnosis, treatment and communications, among others. For example, part of the dementia assessment process relies on monitoring and asking about routine activities, like cooking or shopping. However, because the caregivers usually cover these activities as part of a culture aimed at reducing the burden on older people, it could be hard to assess or monitor the progress of dementia. A recent workshop/anecdote from healthcare providers in the region suggests that, given the lack of regular day-to-day activities regularly undertaken by older people in the region, they find it challenging to capture the early onset of cognitive impairments. Some healthcare professionals try to mitigate these by asking detailed questions related to religious practice, like praying details as part of the dementia assessment process, which risks excluding certain groups or inaccurate diagnoses.

On the governmental level

Governments in the MENA region are under immense pressure to provide sustainable pension systems, ensuring funding to meet the cost of establishing formal social care systems, including adequate long-term care services, among others. However, there is already a demand to deal with a youth bulge. Many countries in the region currently have most of their population as children and young adults of working age. While this could be celebrated as population dividends, it also means the governments need to direct most resources to support these groups, including ensuring affordable education and creating jobs. The latter is particularly important in a region known for its high level of youth unemployment of around 26%.

Conclusion: The MIPPA review is an opportunity to bring the MENA region's governments together to review their commitments towards the ageing transition. Given that most countries in the region have yet to transition to an aged population, now is the time to act. They can start raising awareness for the ageing transition and promoting health-related activities and healthy lifestyles to prepare older age groups to enter later stages of life with better health conditions. This preventive approach is cost-effective, as improving individuals' health and wellbeing at the early stages of ageing will reduce future pressures on the pensions and health care systems and long-term care costs. In addition, it will help individuals enter their later stage of life with good health, increasing their likelihood of living independently, improving the quality of life, and leading to more involvement with their communities.