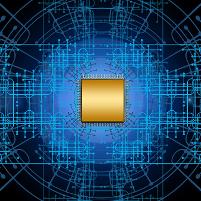 Population ageing and semiconductors: the global race for digitalisation

Population ageing and digitalisation have been identified as major interesctions which will  shape our future. The pressure to enhance national productivity and to overcome the potential challenges of labour shortage due to population ageing is one of the forces behind the rapid developments of digital sectors. Think tanks and policy makers of the ageing societies regard digital innovations important cornerstones for economic competitiveness, better quality of life and solutions to overcome the shortage of labour. Many powerful countries are boosting the investments into the semiconductors industry while denying hostile countries the access of advanced technologies. Disruptive technologies, such as quantum computing and neuromorphic chips are among new frontiers.

The speed of digitalisation is now accelerating during the on-going pandemic. Semiconductors are  the driving force behind the digital transition. Electronics devices, data centres, cloud computing and 5G networks all require processing powers, data transferring, and storage powered by semiconductors. Emerging applications, such as driver assistant systems for cars, artificial intelligence, cybercurrencies and automations, are driven by faster, smaller and more energy efficient semiconductors. As some researchers declare the age of oil comes to an end, semiconductors industry becomes vital to the world economy and the national competitiveness.

In early 2021, the automotive industry experienced a shock of the shortage of semiconductor chips and almost all OEMs needed to stop some productions regularly. The chip shortage is estimated to cost the automotive industry 210 billions USD in 2021. The impacts to consumers, manufacturers and workers are spreading out across the globe. Policy makers from the US, Japan and Germany have contacted semiconductor chip manufacturers either directly or through diplomatic routes to intervene the normally trading relationships in the private sectors. Over 2021, the shortage has not shown the sign of relieve and the impact has spread to consumer electronics. Sony cannot make enough PlayStation 5 for consumers and Nintendo needs to reduce the production of Switch. Even Apple is likely to cut the i-phone 13 production. Industry experts predict the shortage of semiconductor chips could last till 2023 despite a surge of investments and capacity expansion globally by the largest manufacturers such as TSMC of Taiwan, Samsung of South Korea and Intel of USA.

While the demand of semiconductors is soaring, the supply side of semiconductors manufacturing is not distributed evenly in the world.  After decades of development, the semiconductors supply chain has been dominated by a handful of countries and few players. 92% of the advanced IC manufacturing capacity (<10nm) is in Taiwan (TSMC). The US is leading in Electronic Design Automation (EDA) tools (Synopsys, Cadence) and manufacturing equipment (Applied Materials, Lam Research). Memory technologies have been concentrating in Korea (Samsung Electronics and SK Hynix), while Japan supplies some key materials and equipment (Tokyo Electron) for the industry. ASML in the Netherlands is the only company which can deliver advanced Extreme ultraviolet lithography equipment for the most advanced semiconductor manufacturing.

The importance of the semiconductor industry is inevitably becoming the centre of geopolitical conflicts. Back in 2019, Japan suddenly restricted three chemicals exports (which Japan has 90% world supply) to South Korea due to the dispute of the historical discourses. It consequently hurt the production of leading memory producers in Korea (Samsung and SK Hynix) and their customers, such as Apple and Huawei. From Trump to Biden, the semiconductor industry has been high on the agenda between the US and China trade war. The US has applied multiple restrictions for China to gain advanced equipment and technologies, so called choke points, for the semiconductor manufacturing from the rest of the world. Facing the rapidly ageing population and the pressure to enhance productivity, China is unlikely to give up the technology ambition. The conflict also puts the already contested position of Taiwan in an even risker position. China, USA, and Taiwan have already a long dispute across topics sovereign, human right, and democracy. The tension between China and Taiwan is escalating to new height and some reports threat that the strengths of Taiwan’s strengths in semiconductors could even spur a Chinese take over.

The impacts of the COVID pandemic and the semiconductors shortage have further intensified competition and fuelled geopolitical tension. The disputes could spread into more contested aspects, such as sovereign, historical discourse and human right, and escalate the conflicts. To tackle the supply chain disruptions and avoid wars, the world will need some self-restraint, and enhanced dialogues.

Luc Yao is a Visiting Fellow at the Oxford Institute of Population Ageing. Luc is based in Darmstadt, Germany and is active in the electronics industry, related start-ups, and the Open Innovation networks.  His research at the Institute focuses on the adjacent domains of population ageing, innovations and strategic investments.