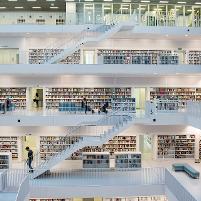 The term “a third place” was coined 3 decades ago by sociologist Ray Oldenburg to describe somewhere people can go that is neither home nor work, a place to meet people, talk and do things together.  It could be a café, a church, a pub, a park, or a public library.  The idea of a third place (and  more especially the lack of them or their disappearance in recent years) has now caught the attention of researchers on age-friendly cities.  It is unimaginable that a city could be really age-friendly if it lacked accessible public spaces that are popular among older people and offer them somewhere to socialise.

Many venues that function as third places have not been designed specifically with this function in mind, and this is of course true of libraries.  But it is obvious that libraries can and do fulfil this role.  In our rapidly changing cityscapes (I’m talking about the USA here) they are one of the few indoor spaces left where anyone can enter and stay as long as they want without being expected to buy something.  Increasingly, however, new public libraries are being designed specifically with this function in mind. The aim is to realise their potential to act as community hubs or civic assets that are multi-functional and congenial and appeal to young and old alike. They are designed as “places of sociability and encounter rather than areas strictly for book reading and learning” – in other words as third places. A particularly fine US example of a new public library that attempts to take the idea of a multi-functional municipal amenity to a new level is in the mid-western city of Dayton, Ohio (which was inspired by Dokk1 in Denmark – the ‘new meeting place’ for Aarhus). In this case reimagining (and redesigning) the library is integral to the urgent and difficult task of reimagining (and redesigning) the city.

Dayton and Dokk1 are expensive projects because they involve new buildings on large sites. Such projects are expensive, and therefore hard to get off the ground, even when they are not in city centres.  Fortunately, not all community development has to be like this.  It’s possible to reimagine libraries - give them new roles in addition to their original and more well-established function - without putting up expensive new buildings.

My own interest as founder of Partners for Livable Communities is precisely with those new projects or developments that connect neighbourhood regeneration with the provision of services and amenities for seniors.  And to me it makes perfect sense to encourage traditional institutions embedded in the community – like libraries – to take on new roles in their communities.  We have seen in the last few years many flagship projects in the US that make use of existing libraries as public spaces for the delivery of programmes are specifically intended to benefit seniors.  Lifetime Arts, for example, now works with Brooklyn Public Libraries and Wyoming Public Libraries to run educational programs for ‘creative aging’ as part of their community strategy to promote wellness and combat social isolation, especially among more disadvantaged sections of the older population.  And it’s not surprising that the pandemic has been a major factor in helping release new funding for this kind of project.

What is even more exciting and novel than this is the growing interest in new residential developments that combine public libraries – third places - with affordable housing as a way of helping disadvantaged communities, especially in city centres.  And this often means new buildings rather than reimagining the uses that can be made of old buildings.  One of the first examples of a library and affordable housing sharing space took shape in San Francisco in 2006 as part of the Mission Bay redevelopment, where the city partnered with a non-profit affordable housing developer to provide a branch library as a civic anchor. The building that houses the library also has a community meeting hall, a health centre, a coffee shop, and 140 apartments belonging to Mission Creek Senior Housing.  The idea was to expand the choice of housing options for seniors who wished to leave their current accommodation for something more “suited”  to their preferences and needs – and to make sure that some of the new accommodation qualifies as “affordable housing”.  So mixed-use developments with at least some affordable housing designed for seniors.

Portland, Oregon has more library cardholders per capita than any other city in the US. It is also known for pioneering efforts to prevent urban sprawl and increase urban density.  In one district earmarked for revitalization, the county commissioners were persuaded to opt for mixed-use developments at their branch libraries rather a stand-alone library, and one of the key conditions in the development was that some of the new apartments should be reserved for households with incomes below the area median.  Also in metro Portland is the town of Cornelius where a small public library in the City Hall has been replaced a much larger library that forms part of a new mixed-use development – a library, a community centre, a fitness centre, and apartments intended to be affordable for seniors with incomes less than 60% of the area median. It was the decision to combine a new public library with affordable senior housing (and so share construction costs) that made both projects possible.

Although there are now several examples across the US of mixed-use developments like these (e.g. Chicago, Milwaukee, Brooklyn) – where a new public library has been combined with affordable housing for seniors – it would be wrong to suppose that developers (except perhaps for nonprofit housing schemes) and municipal or city authorities no longer need to be persuaded of its merits.  They do need persuading. Innovative schemes need champions as well as broad-based local support and a lot of groundwork in order to get the discussion going. The bare idea of a mixed-use development has to be fleshed out with details about design, the planning and legal issues that have to be resolved, and of course the fundamental question of finance with the inevitable discussions about the appropriate mixture of affordable and market rent housing in situations where the availability of public finance is heavily constrained. The gains though should be clear: a new (and free) ‘third place’ in a densely populated urban area; an expansion of affordable housing for seniors in a way that works against urban sprawl and enables them to live near the services and amenities they want; a potential centre for the provision of community services for a growing older population; and a more age-friendly city.

Robert H. McNulty is a Visiting Fellow at the Oxford Institute of Population Ageing. Bob is the founder, president and CEO of Partners for Livable Communities in the United States of America.