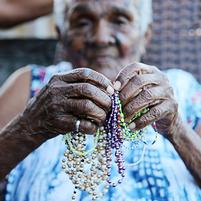 As the world’s populations ages, across nearly all societies women make up a majority of older people. We are all too familiar with the negative, even apocalyptic terms in which ageing societies are described, suggesting that they will be overwhelmed by the burden of older people, a population of dependents who receive but do not provide support. Older women in particular are characterised in this way, despite the growing evidence of the multiple ways in which they contribute to family and community life. Older women who take care of their grandchildren, grow food for family consumption, work in community projects, and earn a living, often in precarious informal work, are typically absent from the narrative of ageing in many contexts.

As a contribution to counter these views a new report from Age International, Older women: the hidden workforce adds important evidence on women’s work by linking a global literature review with extensive interviews with older women in four research locations across sub-Saharan Africa. Two broad threads emerge. The first demonstrates that without the contribution of these older women, their households would have significantly reduced economic and social opportunity, that communities would be less cohesive, and that societies would struggle to function effectively. Older people, especially older women, are integral to the global economy and yet they are not recognised for their work; older women, says the report, are a hidden workforce. While not a new point (see for example Penny Vera-Sanso’s work on the contributions of older women both to family and community and the wider globalised economy of Chennai in India) it is one that bears reinforcing in the global effort to realise the Sustainable Development Goals over the coming decade. The report’s important second thread demonstrates that despite the positive impacts of the unpaid care and other work which older women are providing to underpin economies and societies in development, the experience of work for many older women is one of unrelenting, physically and emotionally challenging toil, either underpaid or entirely unremunerated.

The role of older women in providing family care is probably the best documented arena of their work, in large part because the HIV AIDS pandemic in sub-Saharan Africa in the early 2000s attracted global attention. A large number of articles and publications demonstrated the multiple supports, ranging from paying tuition fees for older children to day-to-day nurturing of younger children provided by older women caregivers. It has also been shown that these older carers themselves faced numerous health and psychological problems, many associated with their own advancing age. Women shoulder disproportionate unpaid care throughout their whole lives. Age International’s 2018 report Who Cares? Why older women’s economic empowerment matters for the Sustainable Development Goals estimated that older women globally do 4.3 hours of unpaid care work per day, with gender inequalities widening in older age in the poorest settings. The research validates a wider body of evidence on the unpaid roles of older women, which shows that older women are often the sole or primary carers of children and of adults with care support needs.

Yes despite this evidence informal family care remains one of the least supported alternative forms of care. At present very few  low and middle-income countries invest any public resources in childcare for children under primary school age, and only a handful have any legally binding requirement to provide long-term care and support. At international policy level there is a similar lack of response. While UN Women recognised ‘grandmother carers’ in its briefing COVID-19 and the care economy  neither this, nor the  wider work that older women undertake, has been reflected in other policy briefings, or in the narrative of UN Women’s Generation Equality campaign or in commitments made at the campaign forums.

The absence of this investment means that the ability of women of any age to participate in paid work, to distribute unpaid care work more equally between women and men, and to break the cycle of gender inequalities is compromised. Women of all ages, argues the report, are trapped in informal work and without access to social protection including crucially for older women, pensions.

Older people are often assumed to be recipients of care and support from others, but the reality in low and middle-income countries is that although older people are more likely than younger people to have care and support needs, they are also likely to continue to work to support themselves, and often others. The main sources of income for older people in many contexts are work, social protection in the forms of (usually small) pensions and family support, which is often sporadic and insufficient. In many contexts a significant proportion of consumption for older people is financed through their own work.

Older women’s work is likely to be informal, precarious, poorly paid and insecure, made significantly worse by a history of interruptions to work. Much of women’s work outside the home is a reflection of their household tasks – cleaning and cooking, making things, providing care and support. They also play a key role in small-scale agriculture, one largely ignored by development agencies. Yet the great majority of small farmers across low and middle income countries and women, of whom a large proportion are older women.

Again, national and international policy show little sign of addressing the challenges of older women’s work. Older women are the least likely to be included in training or micro-credit programmes, or to have access to adequate pension income. They are less likely to accumulate savings, or to have a say in household financial decision-making. The report also highlights some of the structural barriers that impact on the ability of older women to find what the ILO has called decent work (that is productive and delivers a fair income, security in the workplace and social protection for families). These include attitudes and beliefs based on both age and gender, some of which result from lifetimes of inequalities, while others are specific to later life. Marital status, state of health, education and poverty are among the factors creating expectations as to the work that older women can and should do.

Given these challenges it’s important finally to reinforce a point that Age International’s report makes strongly:  that older women globally have aspirations and ambitions for themselves, and take seriously their responsibilities, contributing in multiple ways to their societies and economies. In short, they have agency, and require only that their voices begin to be heard in the wider development debate.

Petition:  Include older women in the UK International Development Strategy