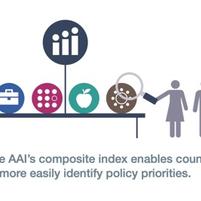 The policy discourse on population ageing is often presented as a crisis for our societies, in both developed and developing countries alike. This is particularly the case when considering the policy responses for pensions and health care systems, which require adjustments to the new realities of ageing societies. However, a focus on challenges only gives rise to anxieties and runs the risk of motivating policy decisions leading to a neglect of the immense opportunities that come with population ageing.

The analytical framework of the Active Ageing Index “AAI” emphasises the positive discourse on ageing. It promotes the idea that the policy of social investment and empowerment of older populations to live active and engaged lives is more cost-effective than the passive management of older people dependent on the state or family.

The AAI was developed initially for the 28 European Union (EU) Member States within the work programme of the 2012 European Year on Active Ageing and Solidarity between Generations. Since then, it has been extended to several non-EU countries offering a credible approach to measure and monitor active ageing among populations of older persons.

The strength of the AAI approach is in its selection of a dashboard of multidimensional indicators of active ageing measuring older persons’ contributions to the economy, society, and their families, but also for their capacity for independent living and potential in different areas of healthy ageing. One novice element of this instrument is the inclusion of measures of enabling age-friendly environments for active ageing.

The selected individual indicators are aggregated into composite measures around various policy domains, namely: Employment, Social Participation, Independent Living and Enabling Environments. The calculations are carried out at the country level only, but a breakdown between older men and women has also been provided.

Thus, the AAI has the potential to serve as a monitoring and benchmarking instrument on positive paradigms of ageing that is complementary to policy frameworks such as the Madrid International Plan of Action on Ageing (MIPAA) and the 2030 Agenda of the Sustainable Development.

What does the latest AAI report for China offer?

The latest AAI for China report calculates for the first time the AAI for China. It reviews ageing-related data sources in China and assesses their potential relevance and applicability for developing the AAI for China that is comparable (as much as possible) to the AAI for EU countries. The research work is funded by the EU-China Social Protection Reform Project (a project co-funded by the European Union and China, running from 2014 to 2018). This line of work is an extension of the research commissioned by the UN Economic and Social Commission for Asia and the Pacific (ESCAP), during 2017-2018.

The research offers critical policy relevant insights for China given its rapidly ageing society. Although many policy discussions are taking place and the importance of promoting active ageing is well understood in China, Central government and local communities should be investing more resources in identifying effective evidence-informed policies to promote active and healthy ageing among its older population.

In our view, this ambition requires development of a high-quality and independent comparative evidence base, and using it for mutual learning and to highlight good practices across countries. Such evidence-informed policies will ultimately help individuals and countries improve the quality of life and wellbeing of older populations.

Since the strength of the AAI is in its comparative analysis of multiple countries, we have also undertaken work towards the construction of the AAI for South Korea, another East Asian country where the speed of ageing is rapid. The AAI results for China have been compared with South Korea as well as with the average across the EU countries to better appreciate the situation in China, for mutual learning and to point to strengths and weaknesses of its policies in the pursuit of active and healthy ageing.

What does the AAI for China tell us?

The AAI score for China is 37.3, which is slightly higher than the AAI score of Korea (35.4) and even higher than the EU average (33.9). If considered in the ranking together with Korea and 28 EU Member States, China is ranked 7th out of these 30 countries. Thus, on the whole, we can say that China does very well in terms of active ageing of its older population.

difference also exists in Korea and in the EU countries, especially in the Southern European countries.

The high ranking of China is mainly due to the high rate of labour force participation among older workers in China. Even though the employment rate is lower for older age groups, in the population aged 70-74 still about 34.2% of the male population and 31.7% of the female population are working. It is a unique phenomenon in China, as many older persons continue working on their private lands till late in their lives, most likely as their lifestyle choice. China fares lower in the other domains: ‘Social participation’, ‘Independent living’ and 'Enabling environment' would rank China as 13th, 29th, and 17th, respectively.

The AAI analysis of this report provides a nuanced understanding to Chinese authorities of the active ageing experiences of its older population, and mutual learning from Europe, despite the fact that the Chinese economic and social contexts are different. Specifically, the Chinese performance on the AAI is strong in terms of employment, healthy life expectancy, physical exercise, and mental wellbeing. However, in several areas, China’s comparative position to the EU AAI average has been low, such as in terms of older persons’ internet access, lifelong learning and adequacy of pension income. Comparison with another East Asian country, South Korea, indicates some notable differences in active ageing, such as high engagement in providing care to children/grandchildren and older persons in China, but levels of a relatively higher unmet needs of medical and dental care amongst the elderly.

Our analysis has indicated that the AAI in its current form is more suited to the needs, priorities and datasets of the EU countries, unsurprisingly since it was first developed with the EU countries in mind. Nonetheless, the AAI for China offers some useful insights, especially in view of the unavailability of alternative metrics.

As expertise around the AAI is becoming more attuned to the broader data compliance and adoption of positive approaches in addressing challenges of a rapidly ageing developing world, a new updated version of the AAI is required, to offer a robust and functional set of metrics for age-disaggregated evidence and policy making on ageing.

The New AAI will take the EU AAI as its starting point, but it is then sensitized to the Asian culture, such as the role of older persons in the society, the norms of filial piety and more informal nature of contributiions of older persons to their families and communities.