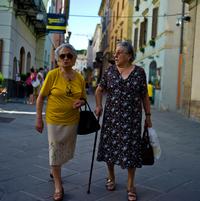 AGE: NOT JUST A NUMBER

Rejoice, my fellow Italians! We should celebrate. It was announced two weeks ago that our lives as  plain “adults” - without age qualification - are longer than we had thought and that we are not to be considered “old” before the age of 75. The announcement postpones access to the dreaded category of “elderly”, which was previously set at 65.

Indeed, during the Congresso Nazionale della Società italiana di Gerontologia e Geriatria (National congress of the Italian Society of Gerontology and Geriatrics), Dr Niccoló Marchionni explained that today, thanks to a healthier life-style, an Italian of 65 years of age can expect to have another 20 years of reasonably healthy life. And there is more: at 65 years old, Italians are fitter than ever, they have active social lives, and they are also able to take care of their families, including grandchildren and those relatives who might be younger but not in good health.  A person with these characteristics, it has been argued, should not be considered old.

The shift from 65 to 75 has been welcomed in newspapers and on TV news programmes. This attention has prompted a question for me: what is the significance of a number in defining a person’s life? Here, I want to share some reflections.

In November this year, a Dutch man launched a legal battle to change his age. He argued that he didn’t identify with his chronologic age, 69, and felt younger, precisely 20 years younger in fact. This man says not only that he regards himself as 49 years old, but that he is entitled to be regarded as such in law in order to avoid unfair discrimination.  To insist that 69 is his ‘real’ age - when he feels so much younger and the declaration (“I am 69”) materially reduces his opportunities - is unfair.  It makes it very hard for him to find what he regards as appropriately aged partners on dating websites and it diminishes his access to jobs commensurate with his capacities.  He knows very well that these days many businesses in his field are not keen to employ someone his age. His case was rejected by the court, which took the view that there are rules, rights, and obligations connected to a person’s chronological age and these have to be preserved. He cannot lawfully change his age.

In our societies (and I don’t just mean Italy or the Netherlands), the number of years since birth - our chronological age - is of great importance in organising and partitioning  our life-course. There are ages that are considered turning points, even though they might be different from State to State. In Italy, 6 is the age when children must officially begin their formal education at primary school. 18 is another crucial age: when a person turns 18, they can obtain a driving licence, they can vote, they have the permission to drink alcohol. For women, 35 is another turning point: up until quite recently pregnant women who are older than 35 were said to have “geriatric pregnancies” and even though the unfortunate label has now been dropped, 35 is regarded as an age marker for medical intervention to reduce the increased risk in pregnancy (i.e. more testing and counselling).

At older ages, there seems to be more scope for confusion, as boundaries are less clear. Earlier this year, Dr David Goodall, a London-born scientist based in Australia, decided to end his life at the age of 104 years old. According to his friend Mrs Carol O’Neill, Dr Goodall was still academically involved in the scientific community when Perth's Edith Cowan University, where he was an Honorary Research Associate, ordered him to work from home, due to safety concerns related to his age. Dr Goodall, who was very unhappy about the decision, appealed and was provided with a working space at a campus closer to his home. The upshot of this was that Dr Goodall  was unable to meet and chat daily with his old colleagues. He felt isolated from his community and less able to participate and contribute to academic life. This, his friend says, was the beginning of what Dr Goodall described as “ageing disgracefully”.

Sometimes it is clear that what society considers old doesn’t match the individual’s perception of their own age.  In the past, there used to be a very precise turning point defined by participation in the workforce, with retirement being  seen as a signifier of old age. Because men typically used to retire at 65 and women at 60, these were considered as marking the threshold of old age. In the past few years, these limits have changed and a great confusion in rules and regulations has followed, so much so that today someone in their early 60 might not know when they will be able to retire. Behind our uncertainty about retirement, there is another seemingly more perplexing question: if old age does not begin at retirement, when does it begin?

The quest for this number is culturally, politically, and ethically charged. On the one hand, focusing only on physical and medical aspects would reduce ageing to something that happens to an object, the body, not to a human being. On the other hand, existential aspects of our lives, such as happiness or the sense of purpose, cannot be forgotten but are possibly difficult to measure. Nowadays, life experiences are more diverse than ever and the same number of years lived might not equate to the same level of health, fulfilment, joy. Also, we shouldn’t forget that inequalities accumulated during the life-course play a crucial role in ageing. Nevertheless, governments need to regulate many aspects of their states, grounding their decisions on how many older people are present in their populations.

Will scholars be able to formulate a better framework to define old age, based not on a simple number for chronological age, but rather on the multiple characteristics of the final stretch of human life? This is a great challenge.

Dr Francesca Ghillani is a Research Fellow at the Oxford Institute of Population Ageing. Francesca was awarded a DPhil in Sociology from the University of Oxford, under the supervision of Prof. Sarah Harper. Her doctoral research identified four key dynamics that regulate the interplay between ageing, migration, and bodily practices.