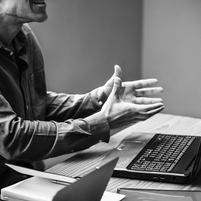 Barriers to employment after 50

Last year I wrote about the Baby Boomers and job loss. Since then, I have seen first-hand how
the system works and how difficult it is for a professional to become re-employed once he/she
is out of a job- and older.

This is the story of my friend Ben. Ben holds a PhD in materials science, an MBA in marketing
and entrepreneurship and an MS in organic chemistry. He has been a fellow in biotechnology
and engineering, and holds several certifications in a variety of disciplines from such prestigious
institutions as Harvard and MIT. Since 2003 he has worked in the pharmaceuticals/biotech field
and advanced his expertise in clinical development and operations. Throughout his career he
has been employed at the senior managerial or consultancy level, overseeing new product
launches, technology integration, programme planning and R&D. He is also multilingual,
charismatic, good looking and in top physical condition.

Ben just turned 60. He lost his job in June when the biotech company he worked for merged
and his operational unit was eliminated. For the next three months I watched him go through
the job searching maze. I was stunned by what I saw. At least in this field, it is no longer
possible to simply submit an application and attend an interview. Before a candidate can get to
that stage, he/she must go through a highly sophisticated, impersonal online screening process,
based largely on algorithms. I describe this below.

First, the candidate locates a recruiting agency and undergoes one to two interviews to
determine his/her suitability for the available jobs in his/her field. Once a job is identified a
resume is submitted. Putting aside how easy it is to screen for age by the experience set forth
in the resume (as discussed last year), the resume is subjected to automated computer
screening based on keywords. If there are sufficient keywords in the resume matching the
employer’s (unknown) criteria, the candidate proceeds to the next stage.

The next stage has roughly three elements: two to three phone screening interviews; an
online test of competency; and an online personality assessment. The interviews are generally
conducted by the company’s HR manager and hiring manager. The competency test varies, and
there may be more than one. I took an online practice test that Ben had downloaded. It was a
computer game in which the player (candidate) is measured by both the number of correct
answers and the time it takes to answer. I got all the answers right but I still scored low because
I was not fast enough. The online personality assessment is composed of a series of statements
measured on a 5-point Likert-type scale, ranging from strongly agree to strongly disagree.
Unlike the practice test I took, neither the competency test nor the personality assessment
provide feedback.

Assuming the candidate makes it this far, he/she will undergo one to two in-person on-site
interviews with several affected stakeholders. In Ben’s case, these were primarily his potential
colleagues, who were all in their 20s and 30s. For senior level candidates like Ben, an online
presentation and a question and answer session are also required. Only then will a successful
candidate be invited to meet with senior level management or corporate heads.
For three months, Ben spent several hours every day on the computer undergoing analytic
screening. In addition to that, he was interviewed online or by phone five to ten times a week.
In the three months of his job search he underwent almost 100 interviews. This resulted in only
five face-to-face meetings with the hiring team of potential employers. He never received any
feedback on why he was not hired.

In September, Ben was rehired by his old company in a senior position (but at a lower salary).
However, there are some observations to make. First, (and obviously) the online screening
process favours the young. Most young people at this professional level have grown up with
computers. They learned how to use them at an early age and have continued to use them
extensively in their daily lives. Moreover, they were taught on computers, and have been
routinely tested on them throughout their formal education. They are likely to be fast, efficient
and knowledgeable. Those who are active in online gaming have an additional advantage in the
competency test. In contrast, most Baby Boomers learned computers as teenagers or adults.
Online testing is not second nature to them as it is for the millennials. Further, as a person ages,
his/her reflexes and cognitive processing become slower, disadvantaging them in timed exams.
Second, a person in his/her 50s or 60s being interviewed by 20 and 30 year olds is unlikely to
have much in common with them. Such candidates may also be perceived as ‘old’ and
irrelevant by their potential colleagues, who may prefer to work with people their own age. A
candidate cannot reach the higher levels (where the interviewers are likely to be older and
more experienced) without succeeding at this level first. Further, in these situations, the job
responsibilities under discussion are descriptive, making it challenging to correlate past
experiences with actual ‘day to day’ job know-how. Thus, in an interview for a specific position,
broad experience and knowledge are unlikely to be valued.

I recognise that it is a new world and that job seeking is highly competitive. I understand the
arguments in favour of youth. However, I am bewildered over why employment has become so
depersonalised and discriminatory. The obstacles against anyone older than 50 becoming
engaged in rewarding and meaningful professional work are almost insurmountable. There was
a time when experience was valued. It appears that this is no longer the case. As Ben admitted,
he was lucky to return to work. Several of his friends (age 50 and over) from the same
professional circle are still looking. It is almost the end of October and the peak hiring cycle is
over. Several months outside the high-tech industry will be devastating to them. There are also
consequences for the industry because professional networks are eroding, broadening the
chasm in technology advancement. It really is quite troubling.

Patricia O’Neill (DPhil) is an alumnus of the Oxford Institute of Population Ageing. She is currently a Visiting Academic at Contemporary China Studies (SIAS), Oxford University and an Associate in Research, Fairbank Center of Chinese Studies, Harvard University.