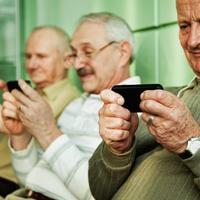 Innovations in modern technology have revolutionized healthcare as we know it. Unprecedented advances in the mechanisms used to capture and analyse data have increased the capacity to predict and mitigate a host of negative health outcomes. Mobile phones now have the hardware and software to collect reams of data from users, without requiring any input whatsoever, via passive data collection mechanisms. For example, using the accelerometer and GPS in a smartphone data on the levels of physical activity an individual engages in can be quantified in an objective manner. These data can these be used to track patterns of behavior over time, which can be examined in relation to health outcomes and associations between behaviors and outcomes can be observed. Techniques such as machine learning can take colossal quantities of data and identify relationships between variables in a data-driven way that has not been previously possible using traditional statistical techniques. The expansion in the capacity to leverage technologies for the betterment of health does, however, suffer from issues such as the “digital divide”, particularly in populations of older adults.

There are two levels to the digital divide: access and adoption. In the early days of computing, barriers to access to digital technologies, such as the internet, were pervasive. I distinctly remember having to take a field trip with my elementary class to a local university campus to “surf the world wide web”. However, as the internet became more accessible, user-friendly, and prevalent, uptake increased in the general population. However, older adults continue to face challenges in the access to these digital technologies. When one looks at the monetary barrier to entry for a modern smartphone, i.e. upwards of several hundred pounds, it is clear that there will be disparities in the readiness with which different groups of people engage with these technologies. For an older adult who is still unconvinced of the value of having these sorts of devices, it hardly seems worthwhile to shell out that kind of money, (which could be a significant proportion of a fixed income). Additionally, there may be a particularly pronounced socioeconomic disparity in the digital divide.

The pace at which technologies, such as the smartphone, are evolving is blistering; even for the most tech-savvy user, there is still a learning curve. Considering that these types of devices have been specifically targeted at the younger demographics, it is not surprising that there are considerable barriers to entry with respect to adoption. The physical features of many smart devices do not take into account the physiological challenges older adults may face, such as reduced visual acuity or manual dexterity. Consequently, older adults may have ample access to digital technologies, but find them unhelpful or impractical to use. Furthermore, within the context of having one’s data collected from digital devices, such as a smartphone, this may put one on edge. Whilst these data may be used to promote health and wellbeing, as demonstrated in the recent Cambridge Analytica scandal, these data can also be weaponized in fairly unsavoury pursuits. Researchers at my alma mater, the University of Cambridge, recently came under scrutiny after Facebook CEO, Mark Zuckerberg, suggested that “what we do need to understand is whether there is something bad going on at Cambridge University overall, that will require a stronger action from us.” Although these claims were largely unfounded - the Cambridge University Psychometrics Center has been using Facebook data since 2007 – the damage was done. The public perception of how these data were being used suggests that there may be malevolent parties accessing and utilizing these data. Consequently, older adults may be further disinclined to want to have their data collected via these devices, despite the potential benefits.

Clearly advances in technology are not going to slow any time soon and the distance between health, health data, and digital devices will continue to shrink. Therefore, addressing the barriers to entry with respect to harnessing and leveraging these advantages has the potential to improve the lives of older adults. The difficulty, however, is having the capacity, foresight, and wherewithal to identify and mitigate these challenges.