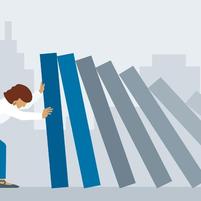 When faced with the challenges of growing older, some people fare better than others when they experience similar levels of adversity.  We call this “resilience”. The likelihood of an individual facing some form of adversity increases with age, as both age-related disorders and limitations in mobility and sensory functions become increasingly prevalent.  This is why the possibility of high cross-domain functioning is the central tenet of the immensely popular “successful aging” model, originally proposed by Rowe & Kahn in the late eighties. Awareness of the limitations of this approach has encouraged the inclusion of components of adversity in the modelling of the ageing process, i.e. the use of a resilience framework.

Resilience models were originally developed in the field of developmental psychology, where researchers tried to identify factors that prevented children born into adverse circumstances from experiencing negative outcomes in their adult lives. Those children who were able to navigate a pathway from adversity to positive outcomes as they grew older were described as “resilient”.  This idea of navigating adversity has subsequently been applied to later stages in life, and in particular to the ageing process.

As models of resilience gained momentum, various ideas emerged about how best to define it. Although there is still no all-encompassing consensus definition of resilience, a recent systematic review of operational definitions used in longitudinal studies highlights the core idea that it involves a response to adversity that is more positive than would be expected given the level of adversity the individual has experienced. The components of adversity and the response to this adversity can be framed with both physical and psychological factors. For example, resilience may be operationalised in terms of some kind of physical adversity, such as a functional or mobility limitation, and a psychological response that is assessed in terms of perceived quality of life or depressive symptoms.

There are currently three broad categories of methods used for quantifying resilience; however, no universally accepted method has emerged.

The use of resilience scales that have been previously validated is relatively popular. This method involves the completion of (usually paper and pen) questionnaires that ask the individual about different domains of life where the concepts of resilience and capacity to cope have purchase. These are easy to administer as the surveys are generally quick to complete, but problematic in that researchers must prospectively collect these data and cannot use this method in studies of secondary data.

Variable-centred methods rely on the way that data interact to quantify resilience. The “interaction” method attempts to look at the way that two variables interact to identify circumstances in which adversity is reduced (e.g. do greater socioeconomic resources protect people against the impact of a given level of physical adversity?).  The “residuals” method examines the difference between the observed and expected level of an outcome. Using regression techniques that plot the expected level of an outcome given the level of adversity experienced, individuals that have a greater than expected level of a positive outcome for some given level of adversity) are identified as “resilient”. This is a useful method because it allows for the quantification of resilience on a continuous scale, giving the researcher a broader range of analysis possibilities.

In contrast to variable-centred methods that focus on associations between variables, individual-centred methods focus on defining subgroups of individuals with particular combinations of features. Methods that use “researcher-driven thresholds” focus on scores that individuals attain on adversity and positive outcome variables to identify individuals as resilient, based on cut-offs or thresholds set by the researchers. Generally, these thresholds are established by researchers a priori. For example, one much-cited paper defines individuals as resilient if they experience the greatest level of adversity - taken here to be the top tertile of adversity scores - and the best adaptation outcomes - the top tertile of positive outcome scores. A more data-driven approach makes use of latent class analysis to identify groups of individuals with similar levels of a given outcome (find the division of a sample into subgroups that maximises differences in outcomes between subgroups while minimising differences within subgroups). This can be used in the context of an adversity (such as bereavement) to identify groups of individuals who have performed ‘better’ (in terms of e.g. depressive symptoms), so as to identify who is resilient or not.

Resilience is an increasingly popular area of study. There is, however, still no consensus among researchers about the ways in which resilience should be defined and quantified. As things stand, researchers have no choice but to examine the question they are trying to answer and the variables they have at their disposal in order to make an informed decision about which method to use. For a much more in-depth overview of the methods mentioned in this brief summary, please see Cosco, Kok, Wister, & Howse, 2019).

Theodore D Cosco joined the Oxford Institute of Population Ageing in 2016 as a Research Fellow. Dr. Cosco is a Chartered Psychologist (British Psychological Society) trained in applied social research methods (MSc 2011, Trinity College Dublin) and epidemiology (PhD 2015, University of Cambridge), and Assistant Professor of Mental Health and Aging in the Department of Gerontology, Simon Fraser University. His research interests include resilience, mental health, and the interface between technology and healthy 3ageing.