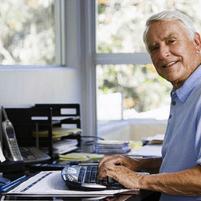 In an era where people in the West are living longer and healthier lives, older workers  not only can - but often choose - to remain in the workforce longer or return to work post-retirement.

The numbers speak for themselves. In the UK, over 50s now make up nearly one third (31%) of the entire workforce, up from around one in five (21%) in the early 1990s. In the US, two age groups - 65 to 74 years old and 75 and older - are projected to have faster annual rates of labor force growth than that of any others.

A consensus is emerging that if we are to benefit from the value that older workers can bring to the workforce, businesses will need to adjust their hiring practices and rethink their commitment to things like flexible hours and re-training programmes.  So too will our concept of education need to evolve, to place even greater emphasis on life-long learning and multi-generational classrooms.

But to do this, we will also need to rethink the sorts of skills these workers need if they are to remain "fit for purpose" in this changing workforce and how to obtain them.

The Importance of Transformational Assets

In their book, The 100-Year life: Living and Working in an Age of Longevity, Linda Gratton and Andrew Scott argue that we need to abandon the traditional idea of a neatly arranged, three-staged life comprised of education, career and retirement. Instead, we need to embrace a multiple-phased life course where people keep learning throughout their lives, take lots of breaks and dip in and out of jobs and careers.

To make this new model of adulthood work effectively, they argue that sector specific knowledge is likely to be increasingly less useful. Rather, adults increasingly need what they call "transformational assets" - which are essentially those that increase the success of transitions and reduce the costs and uncertainty of change.

Technological skills are certainly part of the equation. But the authors also emphasized the importance of things like empathy, communication and analytic skills that can equip people for an episodic career.

This is particularly important in an age of Artificial Intelligence. A recent Pew Research Center survey of 1,408 technology and education professionals suggested that the most valuable skills in the future will be those that machines can’t yet easily replicate, like creativity, critical thinking, emotional intelligence, adaptability and collaboration.

While considerable attention is now being given to how to incorporate these 21st century skills into educational curricula for children, it's time to shift the policy agenda to think about how to instill them in adults, particularly those who are already in their 50's and may not have acquired these skills in their previous careers.

Experiential learning can be one useful tool here. Gratton and Scott advocate for "routine busting" so that adults can learn new skills which can then carry forward across a lifetime. They have in mind extended periods of travel or launching a start-up.

But these sorts of experiments could also entail an adult internship or returnship wherein older adults have a chance to acquire new skills and deepen their networks while being mentored. Some of these programmes even pay.

I have a friend in London who is a successfully retired lawyer from the City. After he retired, he began playing around with the markets and realized that he was pretty good at it. So he approached the head of a hedge fund and asked him if he could come in and work for free for two weeks on a project of their choosing. In return, he would do a presentation for the staff on said project. Fast forward and he's now joined the firm at the tender age of 57 and loving it.

Many of these solutions presuppose a certain level of economic security and or educational attainment in order to make them viable. It's less clear how older workers with fewer resources can afford to either return to the classroom or take an unpaid internship like my friend did.

Mark Freedman - CEO of an organisation called Encore.org that taps the skills and experiences of older workers in the United States, has proposed a range of schemes that might enable older workers from a variety of socio-economic backgrounds to continue to participate in the economy in a way that could augment their skills. These include giving them a chance to do a "Peace Corps" style year in national service organisations, providing educational grants for low-income workers or designing new mechanisms to help people save for adult gap years.

Age UK has suggested the idea of establishing a job brokerage for older workers akin to a recruitment agency. It would keep up to date with the labour market, source vacancies and identify appropriate candidates. Given the expense involved, they have suggested that this service be targeted at the most disadvantaged workers.

It won't be easy. But one thing is certain: this pool of workers is only going to grow. So it is time to get creative with how we get them ready for a long and productive working life.