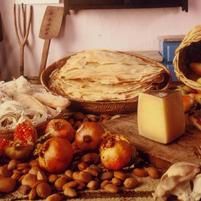 Food transition and demographic change: the role of nutrition in ageing and longevity of populations

The improvement in population longevity is a very complex phenomenon in which a range of environmental, behavioural, sociodemographic and dietary factors all influence physiological mechanisms relevant to ageing. The control of infectious diseases, as well as improvements in standards of living and nutritional status, are known to have large effects on life expectancy.

To support a healthy lifestyle, diet must be complete, balanced and adequate, with sufficient, practical, attractive, varied and regular food portions. This is important in all stages of life, but especially in older adults because to a large extent dietary habits determine health status.

Older adults experience biological changes related to the digestive system (e.g. in the mouth, oesophagus, stomach, intestine and liver) and psychosocial changes (e.g. lack of knowledge about balanced diets, mobility problems, poverty, lack of appetite, social isolation and loneliness), all of which can affect their nutritional status.

It is widely recognised that nutrition has an important impact on mortality and morbidity and that it plays a major role in maintaining and improving physical and mental performance and delaying the emergence of chronic disease. This relationship has become one of the principles that guide health policies round the world. According to various international reports, including the 2002 World Health Report, the 2004 Global Strategy on Diet, Physical Activity and Health and the 2015 World Report on Ageing and Health, the increase in the prevalence of chronic non-communicable diseases is responsible for two-thirds of deaths and 46% of global morbidity. Five of the ten risk factors most closely associated with the development of chronic non-communicable diseases are directly related to diet and physical exercise. The argument that the world has been moving quite rapidly towards a diet strongly associated with NCDs is a now a familiar one.

Several areas in the world have been identified where the population presents remarkable longevity. These areas, called longevity “Blue Zones”, are defined as “areas where the population is characterised by a significantly higher level of longevity compared with neighbouring regions, provided that the exceptional longevity of people in this population has been fully validated”.

Four longevity “Blue Zones” have been validated in the world:

4. The Island of Icaria, Greece

Although these populations are located in different parts of the world, they all present several characteristics in common. Their diet is based on food produced by themselves or locally; they usually have a family vegetable plot; and animal husbandry is combined with hunting or fishing. The people also make good use of all available resources and comprise largely self-sufficient societies. In nutritional terms, these practices mean that they eat whole foods that are rich in polyunsaturated fatty acids and have antioxidant and anti-inflammatory properties; these have a proven relationship with low morbidity and mortality from some chronic diseases and are associated with longevity and a reduced risk of age-related diseases.

I am at the moment engaged in a research study on Sardinia, and our focus is the Blue Zone, in the province of Nuoro. The hypothesis we want to test is that the exceptionally long-lived cohorts in the local population of Nuoro experienced a sustained period of caloric restriction which coincided with their early life development; and then in adulthood benefited from a quantitative and qualitative improvement in their diet, which marked a major nutritional transition for the population as a whole. The idea is that this sequence of nutritional patterns at key stages in the life cycle was decisive for longevity.

It is known that caloric restriction in early life has the effect of reducing the number of adipocytes in the adult organism, and this acts as a protective effect for some chronic diseases. The downside of course is that a long period of exposure to caloric restriction leads to malnutrition. To put it another way, the sustained period of caloric restriction has to occur at the right time of life, and it has to last long enough but not too long.

What also matters is the quality of the diet that marks the nutritional transition for the population as a whole. In this instance, not only does the population have access to more food, but what they are eating has all the hallmarks of what is sometimes called a Mediterranean diet - a high consumption of whole foods, rich in polyunsaturated acids, and foods with antioxidant and anti-inflammatory properties.

What we are going to do is collect and analyse mostly historical data for different cohorts that will enable us to test this idea that an extended period of caloric restriction was followed by a major nutritional transition.

Dr Eva Trescastro was an Academic Visitor at the Oxford Institute of Population Ageing in 2018. Currently she is a PhD Assistant Professor at the University of Alicante and has been accredited as a temporary lecturer and private university lecturer by the Valencian Agency for Evaluation and Planning (AVAP).