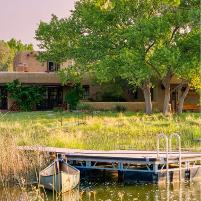 A few years back, I wrote a blog about the promise of retirement villages as a potential solution to the housing needs of a rapidly ageing population in the UK. I'm still a big believer in retirement villages, having witnessed, first hand, their benefits for tackling loneliness and enhancing well-being in the final years of my mother's life.

But since then, a variety of innovative ideas have sprung up that are taking senior housing to the next level...so to speak. Here are three promising innovations in senior housing, all three of which are rooted in the concept of intergenerational living:

a. The four-generational kitchen. Gerontologists and design thinkers have been tackling the issue of how to make the UK housing stock fit for purpose for an over-65 demographic. But the combination of longer lives, the high cost of property and childcare and the caring duties of adult children has generated renewed interest in creating homes that are functional across generations as well. In the United States, a record 64 million Americans now live in multigenerational households - equivalent to one in five homes - and that trend crosses all age, sex, and ethnic backgrounds. In the UK, the demand for multigenerational housing has risen by 38% since 2009.

The primary locus for this work is the kitchen, the most-accessed room in a household, and typically the most dangerous. For the last several years, under the auspices of the National Innovation Centre Ageing, a project in the UK has drawn on extensive user-experience to design what's being dubbed the "4G Kitchen". Features include cook-anywhere surfaces, adjustable height counter-tops and flood-proof spaces, all assisted by Smart technology. Rooted in the concept of emotionally durable design, the kitchen is envisioned not only as a place to cook, but as a place to work, to study, to play games and to interact. Check it out.

b. Home sharing. The 4G Kitchen is premised on the demographic reality of families who increasingly both want and need to live together. A second emerging innovation in senior housing stems from an entirely different set of socio-economic concerns: the lack of affordable housing for young people coupled with the need for income - and companionship - among older people who choose to remain in their homes.

Enter home sharing, which enables two or more un-related people to share housing for mutual benefit. While the pandemic has obviously put a damper on this trend, before 2020, one-third of the adult population in the United States lived in a shared household. Given the economic impact of the pandemic on young people - coupled with the fact that in America, there are some 3.6 million rooms sitting empty that could be rented out, this would seem to be a housing innovation whose time has come...in the U.S., anyway. It remains to be seen whether the UK - which remains among the most age-segregated countries in the world - will embrace this trend. Some seem hopeful that home-sharing might bridge this country's generational divide.

c. Regenerative communities. The final innovative idea revisits the retirement community model I'm so enamored of, but anchors it in the concept of regeneration.  This idea was hatched by Chip Conley, Airbnb Executive and self-described "modern elder." A few years back, Conley and others created the Modern Elder Academy, a midlife wisdom school  for those navigating major life transitions.

Now, with the proof-of-concept in place, Conley and partners want to scale the idea of regeneration beyond just lifelong learning, to encompass regenerative agriculture (i.e., farms that help restore soil through crop diversity, composting and other methods that have proven to have a positive impact on climate change) as well inter-generational models of interaction (i.e. placing nursery schools or day care centres near senior housing). The first such campuses will be built in and around the city of Santa Fe, New Mexico, and will boast both rental and sales properties.  The idea is to begin to fashion a 21st century vision for retirement as one oriented around purpose beyond the self.

I don't know about you, but the Santa Fe project is sounding pretty good to me right now. And, who knows? Maybe I'll install a 4G and do some home sharing while I'm at it.