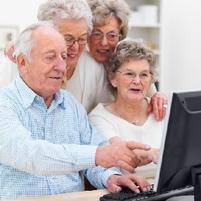 Sometimes it takes a while for a message to sink in. Consider the following: I'm a visiting fellow at the Oxford Institute of Population Ageing. I blog about how to live a productive and meaningful second half of life.  I regularly attend conferences about longevity. And yet, it wasn't until - shortly before Christmas -  I found myself watching a parade of innovators present three-minute pitches on products for the over-50 market that it dawned on me: as a 53-year-old, I am the demographic they are trying to reach.

The setting was Zinc, a London-based incubator that seeks to solve the world's most pressing social problems at scale. This year's mission, Zinc 3,  supports products and services that add five more years of high quality to later life. I'm one of a number of fellows for Zinc 3, there to offer advice and help these projects come to fruition.

The products featured at the December event - all of which are still in the development phase - tackled topics ranging from menopause to hearing loss to job skills and beyond. While not all of them struck a chord with me, I was surprised by how many of them did. And if they weren't quite right for me, I could definitely see their appeal for friends and family.

More importantly, the pitches were spot on to address the burgeoning needs and opportunities of the so-called Silver Economy. The EU defines the Silver Economy as “the sum of all economic activity that serve the needs of people aged 50 and over, including the products and services they purchase directly and the further economic activity this spending generates.” It stretches across all sectors (public and private) of the economy, including health and nutrition, leisure and well-being, finance and transport, housing, education and employment.

Spoiler alert: the silver economy is huge...and growing. A European Commission study conducted by Technopolis and Oxford Economics estimated a baseline value of €3.7 trillion for Europe's Silver Economy in 2015, measured primarily as private expenditure by older people (50 plus) on various goods and services. That same report predicted that this market would will expand  by approximately 5% per year up to 2025, reaching €5.7 trillion. To put these numbers in perspective, if ranked among sovereign nations, the European Silver Economy would currently be the third largest economy in the world, behind only the USA and China.

The UK is no exception to this trend.  A report released in December 2019 by the International Longevity Centre (ILC) entitled Maximising the Longevity Dividend predicts that spending by older consumers will rise from 54% (£319 billion) of total consumer spending in 2018 to 63% by 2040 (£550 billion). At a time of economic uncertainty over what Brexit will mean for the British economy, that can only be good news.

Naturally, a few caveats are in order. First, the over-50 set is not a monolithic bloc. As with everything else concerning the needs of a rapidly ageing population, the kinds of products and services that will appeal to a 55 year-old are not the same as those that might appeal to a 75 year-old. Sunlife Insurance is one example of a company that has done extensive market research on its over-50 target audience and segmented its products for this vast demographic - whether an equity release or a funeral plan - accordingly.

Second, our society isn't set up for this yet. The ILC report is quick to point out that while the additional spending unlocked by tapping into the 75 plus market could add an extra 2% to UK GDP by 2040, that won't happen unless certain barriers to that consumption are addressed. These include inaccessible high streets, inadequately designed products and age-discriminatory attitudes that lead businesses to neglect this market. Royal College of Art Professor Design (and fellow OIPA Visiting Fellow) Jeremy Myerson has talked about the need, for example, to radicalise the fashion industry to meet the needs and tastes of an ageing population.

Which brings us to advertising. It's not just about creating products and services to reach this growing demographic. It's about how you reach them. A study by Gransnet and Mumsnet showed that 78% of those aged 50 or over feel under-represented or misrepresented by advertising, with 49% saying they actively avoid brands who ignore them. An additional 69% suggested they would be more receptive to brands if their advertising represented over-50s more accurately.

Moreover, this advertising should be online. In the United States, nearly half (49%) of those aged 52 to 70 spend at least 11 hours a week online, according to the 2015 State of the User Experience report from Limelight Networks, a content delivery specialist. And a lot of that time online is spent spending. According to the same report, boomers ranked researching and shopping as the third and fourth most important online activities (following news consumption and social media). By way of comparison, millennials ranked shopping as fifth most important.

The promise of the Silver Economy doesn't seem to have penetrated public consciousness yet. Inevitably, it will, if for no other reason than the market will make its voice heard. In the meantime, and to bring this back to Zinc, I was really struck by how many of the budding entrepreneurs designing products for my age cohort were themselves still in their 20's and 30's. Perhaps this is the latest iteration of the inter-generational knowledge transfer. I sure hope so.