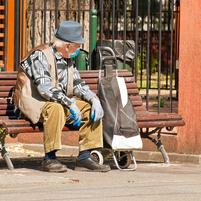 Government Response to COVID-19 and the Elderly

Since my last blog from April 9, 2020, the COVID-19 pandemic has continued with more infections in all corners of the world. There are now roughly 15 million cases, which is about 10 times the number of cases in April, and more than half a million deaths. While it has gotten better in some countries (particularly in East Asia and Europe), it has gotten a lot worse in others (e.g. United States, Brazil, Russia and India). The elderly population has been impacted very negatively but we have also seen a growing number of infections among the younger population in recent months. While we still need more research on the factors behind COVID-19 infections and deaths, there are some interesting findings, which I would like to comment on in this blog.

First, the elderly are indeed impacted strongly by the pandemic but it looks like where they live matters. Switzerland is a good example. In a recent policy brief with my colleague Sonja Pippin from the University of Nevada, Reno, we find almost no correlation between COVID-19 cases or deaths and the share of elderly population in Swiss cantons. This may sound puzzling since Switzerland has one of the oldest populations in the world with a median age of 43.1 in 2020, which is about 12 years higher than the world average, and also higher than the averages for the European countries, more developed countries, and the high income countries. At the same time, Switzerland has a number of cantons that are predominantly rural, where the elderly weren’t impacted as badly. We find urbanization and population density to be important factors in the pandemic. This brings up a concern that elderly in urban areas may be more vulnerable compared to those who live in rural settings that inherently provide better social distancing.

The level of human development may have also played a role, particularly in developing countries. In another policy brief on Nepal, Raju Mainali (Missouri State University), Serdar Yilmaz (the World Bank) and I make this point by showing a negative relationship between the district-level human development index (HDI) and COVID-19 cases in Nepalese districts. We have also found a similar negative relationship between COVID-19 cases and such local indicators as the social inclusion policies (for women, children and seniors) and the participation of women in local government activities. Interestingly, one of the strongest correlations was for social inclusion policy related to senior citizens in local areas. Districts that had better human development indicators with policies related to gender empowerment and social inclusion of seniors seemed to have done better in terms of the COVID-19 outbreak.

There is no doubt either that government policy is another very important factor in COVID-19 outcomes. A recent article in the Economist pointed to government centralization as a problem regarding the public health response to the pandemic in Britain. The article compared the response in Britain to more decentralized approaches in Germany and South Korea, where local government response seemed to have worked better. However, the federal system of government in the U.S. came under criticism recently in terms of the government response to the COVID-19 crisis. The lack of coordination between federal, state and local governments was blamed for the confusion associated with the public health response in the U.S. The response in Switzerland, another highly decentralized country, was to declare “Notrecht” for the first time since World War II, which meant a transfer of extensive powers to the Federal Council to deal with the COVID-19 crisis. Vietnam provides a different example where the central government generally worked well with the provincial governments, and a well-orchestrated local government response made a big difference. With a population over 95 million (and a border with China), Vietnam has had only 401 cases and no deaths so far. My colleagues Dat Huynh (PhD student, University of Nevada, Reno), Serdar Yilmaz (the World Bank) and I discussed Vietnam’s local government response to COVID-19 as a success story in yet another policy brief.

One thing for sure, we are seeing a lot of experimentation with government response around the world, which should provide researchers with a lot of information to evaluate a variety of policies. There are also noteworthy efforts aimed at measuring government responses in different countries. The Oxford COVID-19 Government Response Tracker (OxCGRT) is a good example of that. There will be a lot of lessons to be learned and with good policy-oriented research, we may end up with more age-specific government policies and even broader government reform in the future.