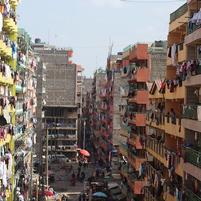 As we grow older our lives are increasingly shaped by where we live, and for growing numbers of older people in both high- and low-income countries, home is in the city. Rapid urban population ageing demands an understanding of the ways in which older age intersects with other factors to marginalise older people in the cities where they live. In recent years much attention has been paid to ageing in rural areas of the global south, ironically because migration to cities has gathered pace, and the concern for those older people left behind in depopulated communities has been a focus of interest for researchers. Less attention has been paid to the ageing of those rapidly growing urban areas, even though early waves of urban migrants are now growing older in the city.

Nevertheless, with the world’s population getting older and increasingly urbanised, the needs of older residents will play an increasingly important part in the shaping of cities. Their experience of ageing is determined not only by social, cultural, legal and economic factors, but also by the characteristics of their immediate environment and the opportunities it provides to them to use public transport, walk about, access public services, breathe clean air, feel safe and secure, and live in appropriate housing.

The built environment can make the difference between enabling older individuals to participate in the life of cities and being isolated at home. In 2019, HelpAge International conducted research, recently published, with over 1,300 older urban residents of Nairobi, Delhi and Mexico City, on a range of issues connected to their experience of the city, ranging from mobility and transportation to security and experiences of ageism, and the social outcomes of these, such as loneliness and isolation.

Their responses provided rich testimony of the ways in which the places where they were growing old conditioned their experience of life, illustrating the importance of factors such as place, and mobility, and the inequalities of these experiences due to location, gender and poverty.

‘Ageing in place’, the practical, affective and emotional attachments to home and community, are of key importance to older people. Factors such as the availability of green spaces and the opportunities they provide to socialise also form an important element of the sense of place for older people. The research in all three cities indicated the higher levels of social participation for those with access to facilities such as shops, libraries and parks. For example, the shortage of green spaces in the Delhi suburb of Sangam Vihar, meant that older residents missed out on the opportunities to socialise enjoyed by residents of the city’s Trilokpuri constituency, making them much more likely to feel lonely and isolated.

Other factors were found to limit the sense of wellbeing that ageing in place should provide. Fear of crime was pervasive in all the research locations. Three-quarters of older people in Nairobi said they felt unsafe walking down their street alone. More than a third in Delhi said they hesitated to go out unless they really had to, because they were afraid of being robbed or harassed.

Exposure to pollution is an increasingly critical issue for all urban dwellers, particularly older people. More than nine in ten older women in Mexico City, and more than half of those in Delhi were concerned by rubbish and sewage in the streets. For example, many older participants whose homes had no toilets, reflected on the consequences for them of exposure to insecure and unhygienic sanitation facilities in their neighbourhoods. Older residents in the informal settlement of Kibera, Nairobi said they relied much more on dirty, inaccessible and unsafe public toilets than older people in nearby Dagoretti, where a significantly higher proportion of older people could use a toilet at home.

Barriers like these restrict the ways in which residents use the city as they age. Not only hazardous and physically inaccessible streets, but also a lack of accessible transport meant that across all the research sites respondents typically reported that they only made journeys if they really had to.  Nevertheless, older people are heavily reliant on public transport, by which over one-third of journeys were made in Delhi and Nairobi. However, this was an increasingly limited option as people aged, since fewer forms of transport met their requirements.

Older people with a disability, and those who self-reported as lonely or isolated, made significantly fewer journeys by public transport than their more able peers. Furthermore, although walking was the preferred option for most people across the age range, increasing age required changes in travel patterns and choices. For example, people aged 90 or over made only half as many journeys that included walking as those in their sixties.

There were some positive responses, reflecting the attention of some municipal authorities to diverse requirements. For example, Older women living near municipal ‘Metrobús’ stops in Mexico City (where bus services have undergone significant modernisation) said they enjoyed more comfortable journeys than they would if they had to rely on the overcrowded Metro or inaccessible microbuses. In Delhi the majority of those aged 90 or over, and of all older women, preferred to make journeys which included rickshaws, because drivers were more responsive and provided a service to the door.

Many urban residents are excluded from public spaces and services because of discrimination due to their age, gender and disability. The research reveals how intersecting characteristics contribute to diverse experiences of urban life in older age and varying degrees of exclusion. Almost half of the older people interviewed said they had been told that, as an older person, they should not be living in the city. Those who felt lonely and isolated were almost twice as likely to have had such experiences.

This study reinforces the findings of other research with older people in urban environments, supporting the case for urban policy which is far more inclusive of older people in all their diversity. This study has pointed the way to further research which would support more age-sensitive policymaking. It indicates a link between a wide range of barriers to mobility, from declining physical capacity to factors such as fear of crime and exposure to environmental pollution and issues such as social exclusion, isolation and loneliness. These relationships merit further study.