The world’s population will rise from just over 7 billion in 2012 to nearly 9.6 billion by 2050. Most of the world’s regions have already achieved or are close to achieving replacement level fertility. “Replacement level fertility” is the total fertility rate—the average number of children born per woman—at which a population replaces itself from one generation to the next, without migration. This rate is roughly 2.1 children per woman for most countries, although it may modestly vary with mortality rates.

Sub-Saharan Africa is the exception to this fertility trend. Its total fertility rate was 5.4 during the 2005–10 period?double that of any other region?and is projected to decline only to 3.2 by 2050. 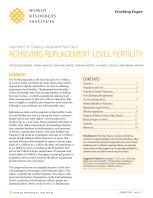